These children escaped Xinjiang, but their parents are in China and cut off from the world – CNN

Istanbul (CNN)It’s been nearly five years since Hassan heard from his family, and he is terrified that he will forget them.He has one photograph of his father and nothing but fading memories from his past. He tries his hardest to hold on to the image in his head of his mother and siblings, but it gets harder each day.”I’m afraid to not recognize my family, to not remember my family, it’s horrible,” Hassan said.Sitting in his dorm room at a Uyghur boarding school in Istanbul, Hassan waits for the day he will be reunited with his family. He dreams of being back in his hometown in Hotan. Hassan was 11 when his father brought him out of Xinjiang, in the far west of China, but he was too young then to get what was going on.

Chinese celebrities rush to defend Beijing’s Xinjiang policy by cutting ties with international brands“I didn’t really understand, I wasn’t thinking about it. I thought we were coming to Turkey as tourists,” he said.Hassan says he has a vague recollection of mounting ethnic and religious tensions in Xinjiang. His parents became afraid to send him to school, and his mother started telling him to get back inside the house when he was playing in the street. 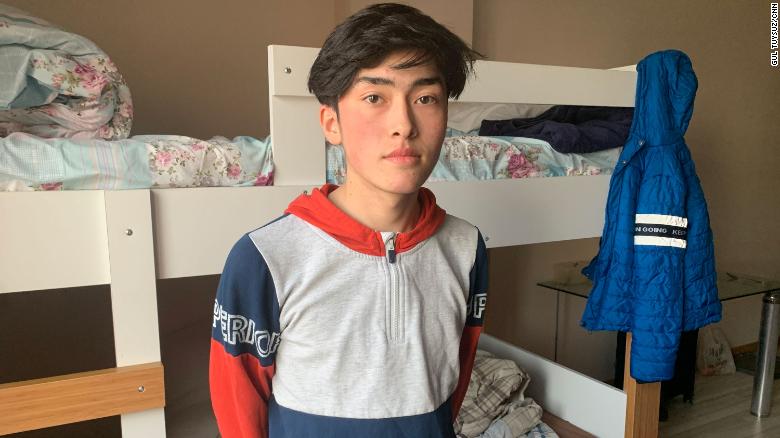 Hassan, now 16 years old, tries to hold on to the image of his mother and his siblings but it gets harder with each passing day. He has no photographs of his family except for a cell phone photo of his father.”The pressure started … everyone was living in fear, the police were everywhere … but I wasn’t really aware, we didn’t understand that we were prisoners in China,” he says.Hassan and his father were the only ones in the family with a passport. His father took him to Turkey, leaving him in the care of an elderly relative with a plan to get the rest of the family out of China. His father returned to Xinjiang and never came back.”I tried to call, but there is no way, communications are totally cut off,” Hassan said. “At the time it was easy to leave, but then when my father went back, the situation became even worse, and travel outside of China was banned. That’s when I realized.”Xinjiang is among China’s most ethnically diverse regions. It is home to a variety of predominantly Muslim ethnic groups, the largest of which is the Uyghur. For centuries, Uyghurs, who have their own distinct culture and speak a language closely related to Turkish, had been in the majority. Beginning in the 1980s that began to change, however, as the government looked to develop the region’s economy, leading to the arrival of large numbers of Han Chinese, the country’s dominant ethnic group. Today, Uyghurs number around 11 million, or just under half of Xinjiang’s total population.

Republicans and Democrats have found one thing they can all rally around: Curbing China’s influenceMany Uyghurs have long felt unjustly marginalized in their own homeland. Grievances related to allegations of unfair economic policies as well as government-backed restrictions on halal food, Islamic dress, and general religious behavior have stoked inter-ethnic tensions and occasional violence. The government has also linked Uyghurs to attacks in Xinjiang and other parts of China. But in recent years, under Chinese President Xi Jinping, government policy towards the region’s minority groups has hardened. Beginning in 2016, evidence began to emerge that the Chinese government was operating a vast system of internment camps set up throughout Xinjiang, in which Uyghurs and other Muslim minorities were extrajudicially detained.As many as two million people may have been taken to the camps, according to the US State Department. Once inside, they are subjected to intense forced indoctrination, intended to de-Islamize and install support for the country’s Communist Party. Testimonies collected by CNN from former detainees describe incidents of torture, sexual abuse and even the deaths of fellow detainees.China vehemently denies allegations of human rights abuses, insisting the camps are voluntary “vocational training centers” designed to stamp out religious extremism and terrorism. Speaking at a news briefing on March 15, Chinese Foreign Ministry spokesman Zhao Lijian said accusations of human rights abuses in Xinjiang were “baseless and sensational.” 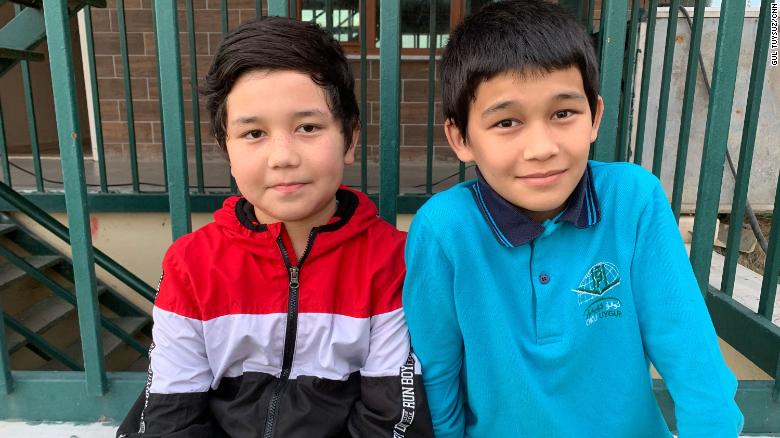 Abdullah, 13, and Mohammad, 11, live and study at the Oku Uyghur school in the outskirts of Istanbul. They have not been able to contact their family in more than four years. As if it was too much to ask that both their parents be in their lives, Abdullah quietly says “at least one of them should be with us.””Xinjiang-related issues are not human rights issues at all. They are in essence about countering violent terrorism, radicalization and separatism,” he said.In recent years, thousands of Uyghurs have sought refuge in Turkey, a country with which they share strong ethnic, linguistic and cultural ties. Today, Turkey is believed to be home to the largest Uyghur diaspora in the world.Hassan’s story about his family and his flight from China is similar to ones shared by other children at the Oku Uyghur school, set up in 2017 on the outskirts of Istanbul. Most of the students have at least one parent who they say has disappeared into the black hole of the Xinjiang camps. Nearly 20 children at the school have lost contact with both parents, according to Habubulla Kuseni, the school’s administrator and founder.”We set up the school so we could keep our language, our traditions, our customs alive and so we could take care of orphaned kids whose parents have died or have been disappeared into China’s camps,” Kuseni said.The overall number of Uyghur children who have been separated from their parents and are living abroad is unknown, according to Abdurresit Celil Karluk, an Uyghur sociologist at the Haci Bayram Veli University in Ankara and author of “Chineseness and being the Other in China.”When it became impossible for Uyghurs to continue to freely practice their religion and customs inside of China, more looked to leave, Karluk said. A brief liberalization in the Chinese government’s passport policy in 2015 allowed more people to obtain passports and many left. But last trips back into China to get other family members out, or to finalize business dealings, left many stranded or detained by Chinese security. 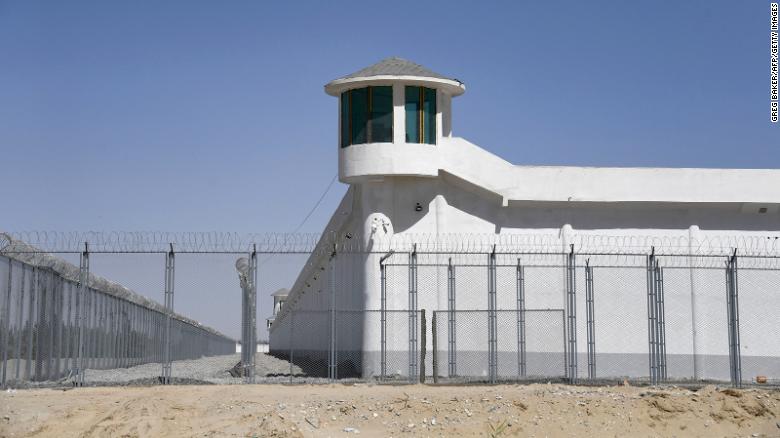 This photo taken on May 31, 2019 shows a watchtower on a high-security facility near what is believed to be a re-education camp where mostly Muslim ethnic minorities are detained, on the outskirts of Hotan, in China’s northwestern Xinjiang region. As many as one million ethnic Uighurs and other mostly Muslim minorities are believed to be held in a network of internment camps in Xinjiang, but China has not given any figures and describes the facilities as “vocational education centres” aimed at steering people away from extremism.”After 2017, the family separation issue really began to crystallize. People were getting arrested just for having connections to Turkey. So families were broken apart, with kids being left here and no communication with the families remaining inside China,” Karluk said. “The broken and separated families is the latest heart-wrenching and painful chapter of 20 years of oppression.”China’s Ministry of Foreign Affairs disputed the claims in a statement to CNN: “The Chinese government has never restricted the freedom of movement of any citizens including the Uyghurs. All citizens, regardless of their ethnicity or religion, can enter or leave the country freely as long as they are not restricted from leaving the country for suspected crimes.”Back at the school, Hassan, now 16, worries about the younger children. “There are so many children, little children who don’t have their parents,” he said.His dorm room looks out on the school yard where brothers Abdullah, 13, and Mohammed, 11, are playing during recess. The brothers take turns on the one scooter shared between all the children, then Abdullah pets a stray dog lingering in the yard.Mohammed barely remembers his parents’ faces. Abdullah says he remembers his mother but not his father. They’re trying to hang on to the fading memories. “Dad had a shop, he would get home after we were asleep, mommy would put us to sleep,” Mohammad said.Their story sounds almost identical to Hassan’s. The brothers say their father brought them to Turkey in 2015. Their mother and the rest of their siblings stayed in Xinjiang because they didn’t have passports. Their father left them with a family friend, saying he would be back in a month with the rest of the family. The children were able to speak to their mother on the phone while staying with the family friend.”My mother spoke to us and said that they took daddy’s passport, she told us that he isn’t coming but that we’ll see each other again,” Abdullah said. “My mother also told us that daddy was in the camps,” Mohammed added. The family friend tried to call after that, but the boys’ mother never picked up again.The brothers don’t know what they’ll say to their parents if they ever see them again. And as if it was too much to ask that both parents be in their lives, Abdullah quietly said, “at least one of them should be with us.”