East Turkistan at a Glance

The term EAST TURKISTAN here means the whole of East Turkistan known as the land of the Eastern Turks (Tarim Basin, Junggar Basin, and Kengsu). It includes the present-day administrative areas of the so-called “Xinjiang”* Uyghur Autonomous Region and parts of western Gansu and Qinghai Province that were annexed by China during the 1940s.

*The Chinese colonial term “Xinjiang” meaning ‘The New Territory’ or ‘New Frontier’ was imposed by the Chinese occupational forces in reference to East Turkistan. The derogatory Chinese colonial term is highly offensive and strongly hated by the people of East Turkistan.  Eastern Turkistan has maintained throughout its history a distinctive and sovereign national, cultural, and religious identity separate from that of China and, except during periods of illegal Chinese occupation, has maintained a separate and sovereign political and territorial identity. 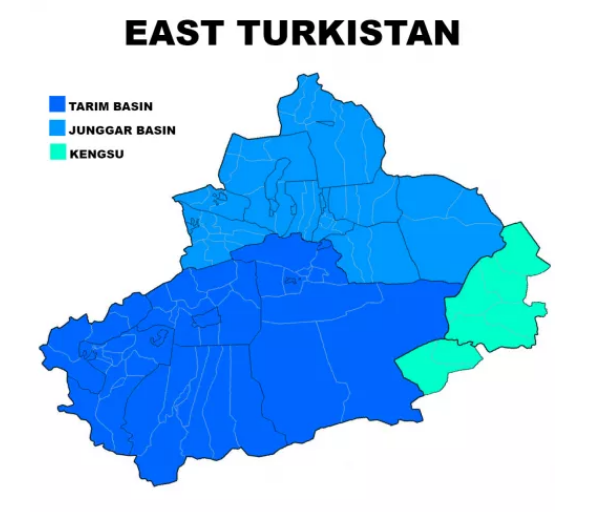 Occupied country (since December 22, 1949) and without United Nations’ Representation.

The total Turkic population of East Turkistan is around 35 million (with over 30 million Uyghurs, and the rest are of other Turkic populations such as the Kazakh, Kyrgyz, Uzbek, and Tatars).

90% prior to removal of native Turkic (Uyghur, Kazakh, Kyrgyz) language classes. It is now estimated to be around 40%.